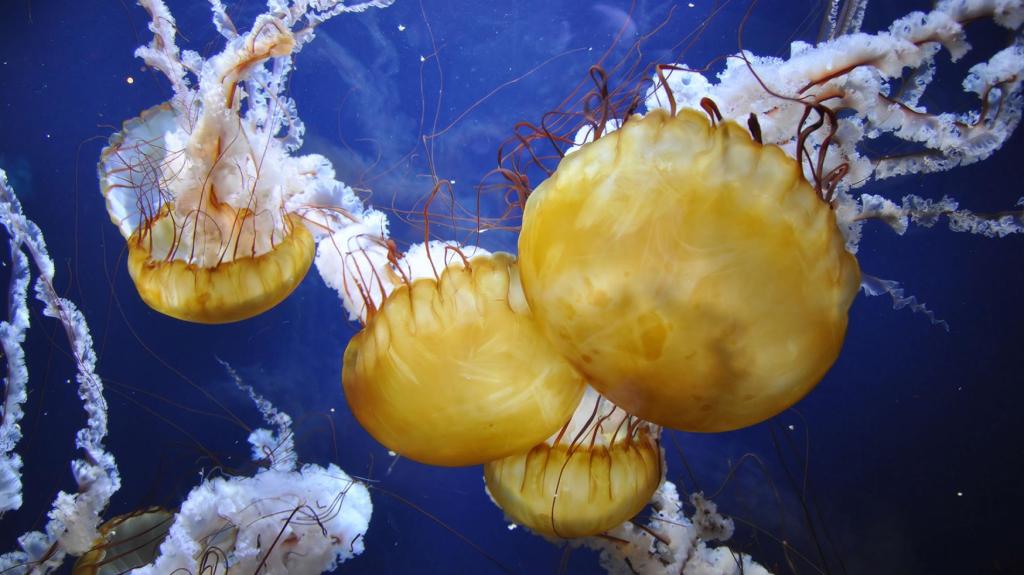 From their bloodless brainless bodies to their extreme ability to regenerate and survive in extreme environments, jellyfish or more properly, sea jellies, are quite an extraordinary group of organisms.

What’s so interesting about sea jellies? Well for starters they have been around for nearly six hundred million years appearing in the fossil records during the Cambrian Period. This old age allowed them millennia to evolve and give them some of the most incredible attributes in the animal kingdom.

These animals aren’t like your run-of-the-mill mammal or fish because they have no brains, no blood, no lungs, no heart, and only five percent of their structure is tissue. The tentacles of a jelly contain thousands upon thousands of tiny little cells called nematocysts. These cells contain coiled up harpoons that when agitated become rigid and fire at lightning fast speeds into the target injecting venom to either kill its meal or ward of potential predators.

The anatomy of a sea jellies is, as expected, quite simple with very few complex parts. They have a main hood or bell that house its stomach and gonads [which are their reproductive organ.] Jellyfish do have specialized eye spots on their bell that let them see prey and slowly drift towards their next meal. Below the bell is the bell margin where the tentacles and the oral arms that aid it in food consumption.

Throughout a jellies life they go through many different stages. The first step requires both a male and female jelly to release their ingredients into the water creating a fertilized planula. This larval phase of its life proceeds to anchor itself to the seafloor and grows into a polyp. This stage can take awhile and several months or even years pass until the polyp actually starts to clone itself. The new group of polyps then bud and turn into a ephra which is the final stage before maturing into a full grown medusa sea jelly.

There are some sea jellies that stand out among their gelatinous brethren and they each have their own awesome abilities.

Probably one of the more famous jellies is the box jellyfish, and although there are many different varieties of them the one most commonly found and portrayed in the news as a cold blooded killer is Chironex Fleckeri. Located on the oceans near Australia and can be found all the way to Vietnam. This box jellyfish earned its nickname the Sea Wasp because of its highly potent venom.

These small and almost completely see-through jellyfish have venom so powerful it can kill a human being. When stung, a victim will feel immense pain on the point of contact, shortness of breath, and a soreness in their heart. If enough venom gets into a swimmer they can become paralyzed and drown or suffer from heart failure and die before even surfacing the water.

On the other less deadly side of the spectrum lives a very unique jellyfish by the name Turritopsis dohrnii or more commonly known as the immortal jellyfish. Its superpower, as you may have guessed, comes from its bio-mechanical ability to effectively live indefinitely. Many of this species don’t actually live forever, however, because they often get preyed on by predators or catch some sort of disease. When stressed by the environment, the immortal jellyfish can revert itself back into the polyp stage of its life; thus asexually creating more clones of itself and continuing to live as multiple new organisms.

Jellyfish are a diverse group of creatures that have evolved over millions of years to a point where they are some of the most fascinating creatures on the planet.

US Department of Commerce, and National Oceanic and Atmospheric Administration. “What Are Jellyfish Made of?” NOAA’s National Ocean Service, 12 Apr. 2010, oceanservice.noaa.gov/facts/jellyfish.html.


Guidelines:
The ideal submission is a compelling argument about a timely topic made by someone with some extent of expertise in the topic. The post must be a topic that is clear and relatable to the general public. The word limit should be set around 600 words or less, and should be thoroughly proofed before submission.
You must include a phone number or email address specifying whether you would prefer a call or text for verification purposes.