In June 2019, Chad Wynne, ACA’s Social Sciences department head, will be leading a small group of two students and one mom, on an educational tour through Spain and France.

This tour group is unusually small, Wynne says “We are a very small group, and so it’s just me, two students, and one of those student’s mom’s. I was hoping for more people, but at this point this is all we’ve got and that’s okay with me…I could have said ‘no we’re not going to do this’ but I didn’t want to deny these two guys the trip to Europe.” The main reason for so few people going, Wynne thinks, is the price tag; the current price for the tour is $4,190 per person, and it could continue to go up.

Nevertheless, the tour group would love for more people to go, and Wynne says that there is still time to sign up. Haladar Wright, one of the students going on the tour says “It’d be nice to go with more people.” And Wynne agrees saying “I would love more people [to go]!” 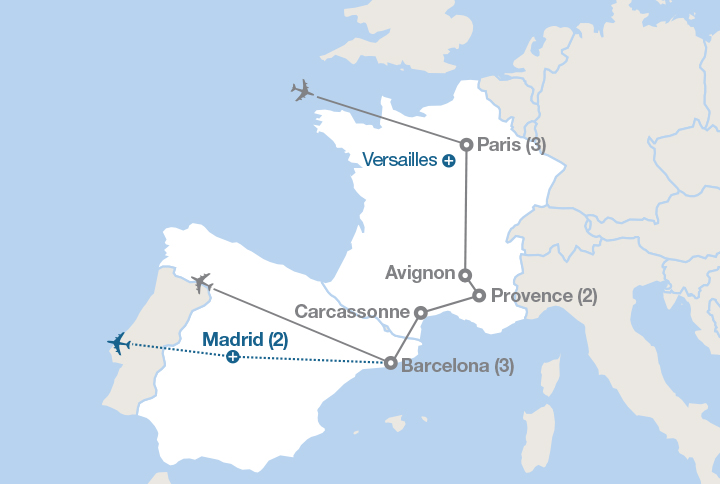 The tour leaves for Paris, France on June 14, 2019. The group will spend four days in Paris, then travel to Provence, France and spend two days there, then travel to Barcelona, Spain for the final three days, coming home after a total of ten days on June 23, 2019. Wynne says that the tour company he’s working with, EF Tours, will provide tour guides in each city, bus drivers, and other things like that. As for who can go, Wynne says that the tour is open to all middle and high school students, and some parents. He also says they like to have a majority of students and just a few parents. In addition, Wynne says “If you’re studying Spanish or French it’d be nice, but you don’t need to know the language [to go]…all of the tour guides will be speaking English.”

Wynne is a very experienced leader, this will be his eleventh tour. He says “I’ve taken seven groups to Australia, and two groups to the United States, and last school year I took a group to Japan, but those first nine were when I was working in Japan and so I took Japanese students to Australia and America.”

Cassandra Lewis, the mom going on the tour says “I know he [Wynne] is very organized, kind and funny. He will be a good traveling companion and leader.”

Everyone has something that they are most looking forward to. Wright says “We’re going to this castle in France called Carcassonne, and…it’s got this wall all around it and it’s really cool. One of my favorite board games was based off of that castle, so I want to hopefully buy or bring the board game that was named after that castle to play in the castle.” Lewis says she is “planning on trying to see a women’s World Cup game while we are in Paris…” And Wynne says he is really looking forward to going to the town of Avignon in France and seeing the Roman ruins. Everyone on this tour is very, very excited to go.