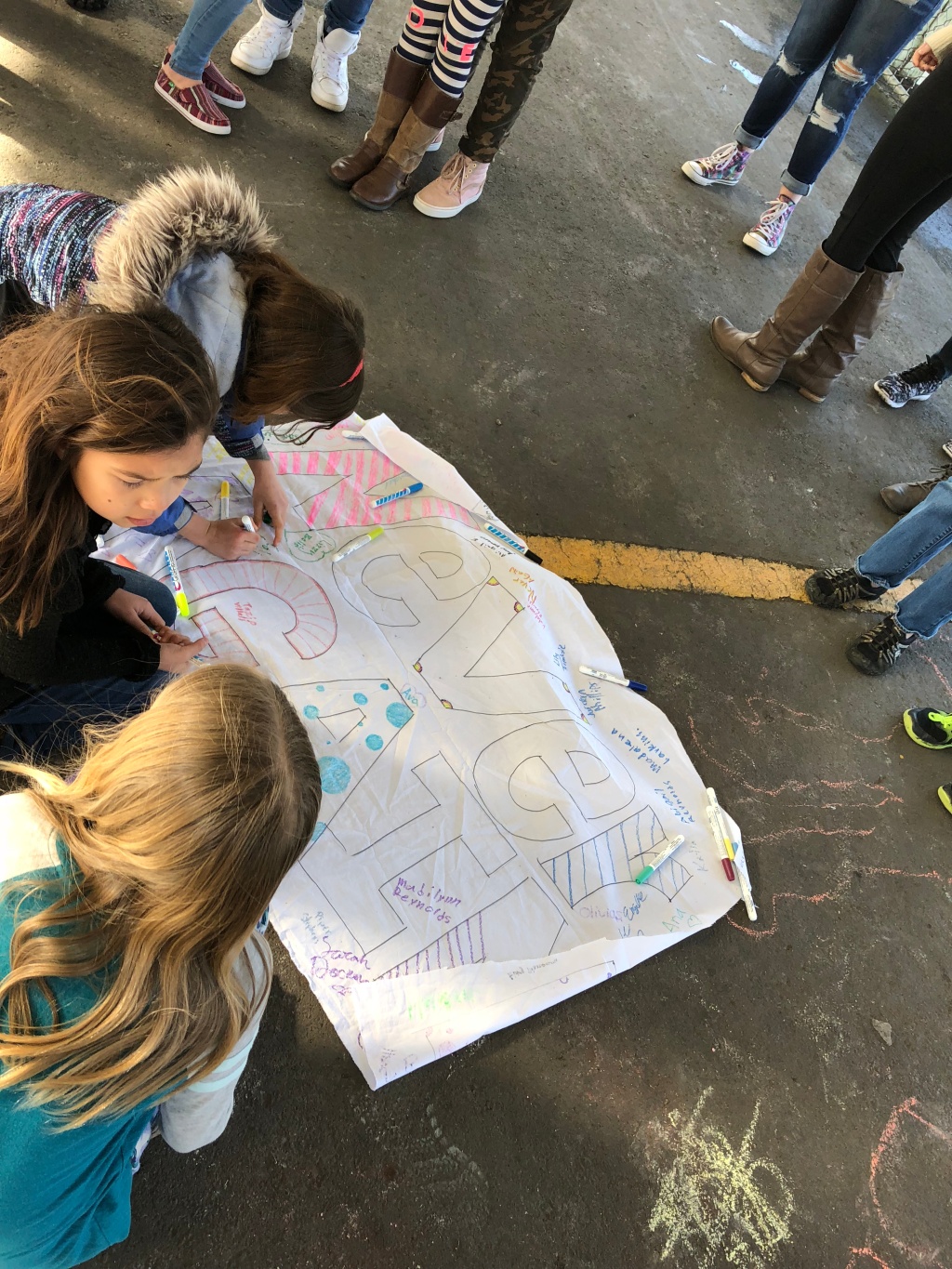 Anger and sadness over gun violence in America is present even in ACA. This was apparent on Wednesday, March 14th when roughly thirty-five students walked out of class in protest of current gun policy and the toll it has taken on our schools.

The walkout was prompted by the Parkland school shooting which took place on February 14th of this year at Stoneman Douglas High School in Parkland, Florida which killed seventeen people and injured 17 more.

For seventeen minutes, starting at ten AM, students stood under the covered area in the back of the school. It included seventeen seconds of silence for the seventeen students who lost their lives and the decoration of a poster that read “never again”, a popular social media hashtag, for the cause of changing America’s gun policy.

Tenth grade student Ashton Scott lead the moment of silence by saying “Let’s all take a moment to put our phones away and take seventeen seconds to remember the students that were killed.”

Ninth grade student, Nicole Engelke, says she participated in the walkout “because I believe that our state and federal legislators need to do something besides ‘sending thoughts and prayers’…I cried, because it makes me sad (and scared) that it costs thousands of people’s lives for the government (that is supposed to be protecting us from this stuff) to pay attention to the problem that is right under their noses.”

Abigail Engle, also a freshman, feels similarly to Engelke. “I participated in the walkout because I believe that there should be tougher gun laws. There have been too many attacks and too many people have died,” she says, “I want the president to see how many kids care about this, I want him to take steps so it never happens again.”

The walkout was brought to Nic Chapin’s attention by Amy Romero after she and Engle heard about it on Instagram. “I started talking to my friends about it, most said yes,” says Engle. “once I knew people were going participate, my friend and I started talking and she went to talk to Nic. He then organized the rest.”

During the walkout Julie Swanson, head of the English Department and teacher, stood with the students instead of the supervising faculty. When asked about this decision she says “I stood with the students for several reasons. First, as an educator to honor the 17 students and teachers who lost their lives. Second, as a parent – I do not like the fact that this is a reality in the lives of my two boys.”

Danelle Till, an administrator says the faculty was concerned about the possibility of some kind of harm coming to the students participating in the walkout, “We wanted to put the students behind the school. If you want to do harm and know that students are walking out of the school at ten AM, it is a perfect opportunity….we [the faculty at ACA] talked about what was needed in terms of safety” The school administration was prepared for the walkout, says Till “Mr. Chapin went to a meeting with all of the principals in our district. They discussed the role responsibilities of teachers and what teachers could and couldn’t do.” 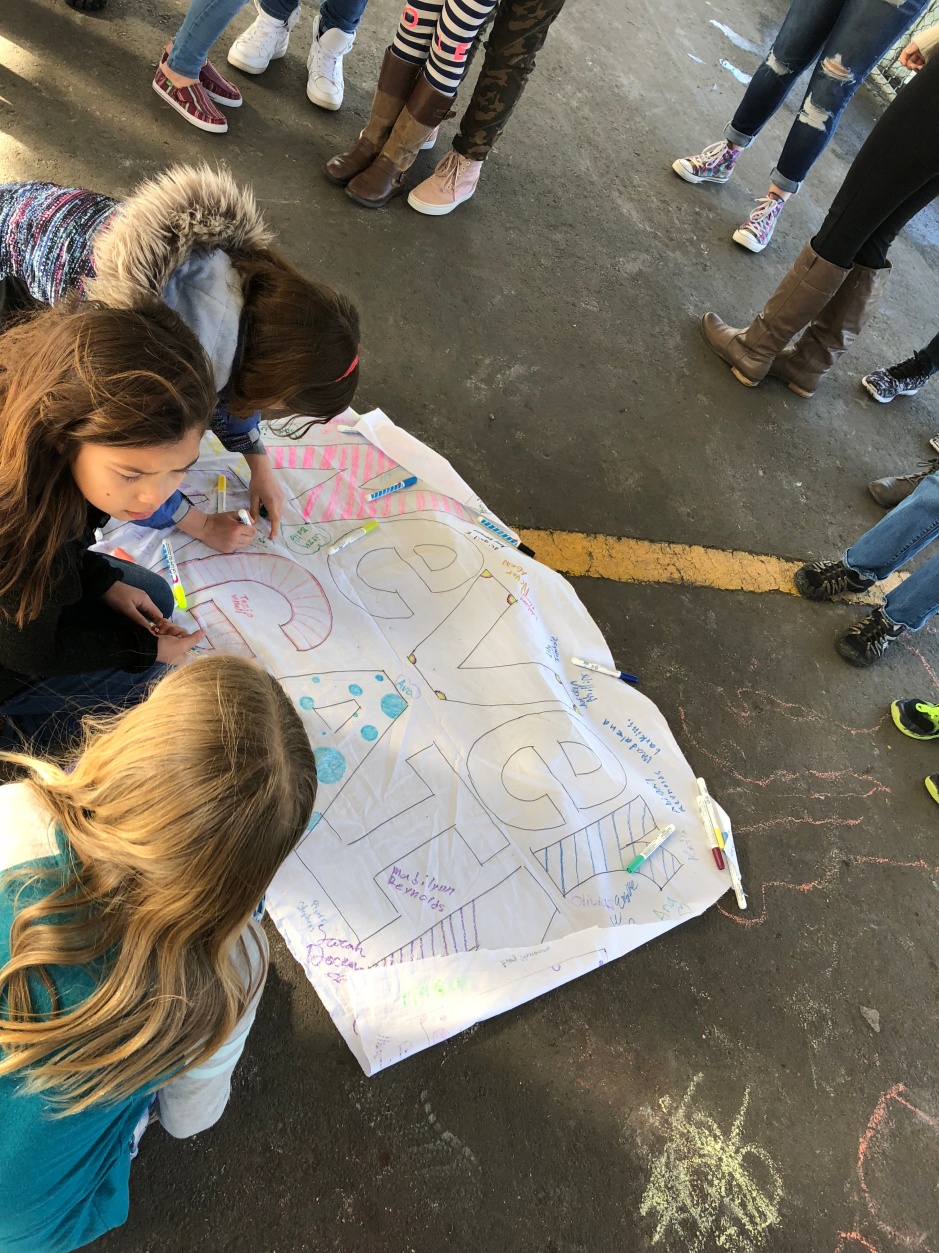 Calia Lancaster, Larissa Toth and Vedavati Wright coloring a banner made by students before the walkout. The banner used the “Never again” motto/hashtag which is popular online. Wednesday, March 14.