By Michael Lancaster – The Charter News

When a trespasser entered ACA recently, a team of administrators, staff, and students sprang to action.

Safety and order were quickly and calmly restored.

It was about 8:15 a.m., Tuesday, Feb. 21, when some commotion could be heard outside the ES room. A small group had gathered in the main hall, between the front office and the library. Heads were looking up. There was excitement in the air.

And there was a bird on a wire.

The small bird, later identified as either a bushtit or a ruby-crowned kinglet, had somehow entered the school. It was perched on an ethernet cable strung high in the hall near the office copier. As staff and students were beginning their school day, the bird hung fast to its perch near the ceiling. It was small, brown, and nervous-looking. It would have been easy to miss had it not been for the crowd gathering below.

That’s when the rescue plan was developed and carried out. Exton, a freshman, had summoned enough onlookers. Joe Young, Oregon City School District technology specialist, got the ladder from the closet down the hall. Mohr, ACA assistant director, got an aquarium dip-net from the science room.

Once the step-ladder was set-up, Mohr was afforded the elevation she needed to exercise her animal-calming skills. With the green dip-net in hand, she purposefully ascended the yellow stepladder. She kept her eyes on the bird. She was silent. Her movements were slow and steady.

The crowd below continued to grow, slowing down others who were more determined to get to the copy machine or their class or meetings. Excitement was mixed with suspense as Mohr attempted her rescue. 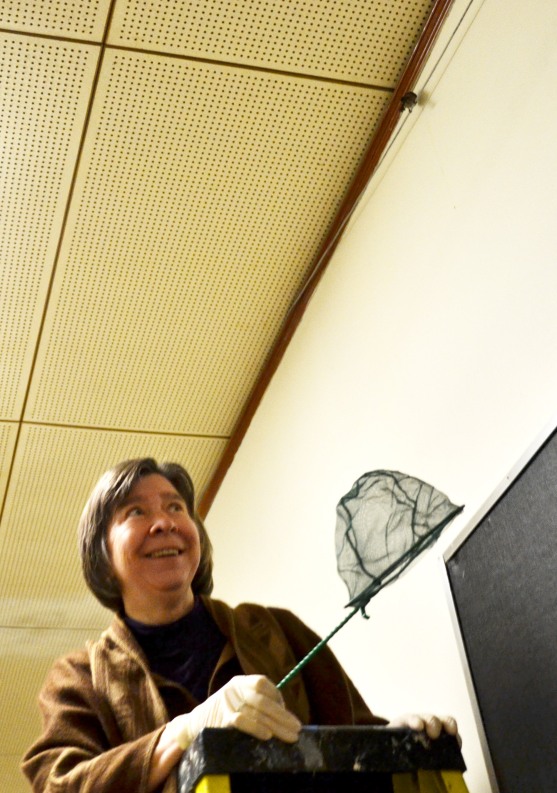 Not everyone was impressed.

“What’s the big deal?” asked Brandon Bean, a senior. “Haven’t you people ever been to Costco?”

Mohr netted the bird with ease, but then needed a hand from Educational Specialist Mary Coleman as she descended the ladder.

After allowing for some closer inspection of the bird, Mohr released it outside.

“I took it outside, held it in my open hand, it looked at me for several seconds as if to say ‘thank you’ and then flew off,” Mohr later wrote in an email.

No one knows for sure how the bird entered the school. Freshman Gavin Young said he believes the bird stowed away in his collar. He said the bird flew out of his coat as he took it off. ACA Director Nic Chapin is convinced the bird flew in through the front door as staff or students were entering.

This was at least the second time an animal from the neighborhood has entered the building without permission. Last school year, a dog wandered in and was quickly welcomed back out, according to Mohr.